Guy has a broad commercial Chancery practice, with a particular emphasis on civil fraud and insolvency law. His recent instructions include:

Guy is a contributor to Transaction Avoidance in Insolvencies 3rd Ed. (2018) and Loose and Griffiths on Liquidators 9th Ed. (2019). He read Philosophy & Theology at Keble College, Oxford, before gaining a Distinction on the GDL and an Outstanding on the BPTC. He is a Hubert Greenland, Hardwicke, and Lord Bowen scholar of Lincoln’s Inn.

As a pupil, Guy was also involved in the trial of Singularis Holdings Ltd v Daiwa Capital Markets Europe Ltd [2017] EWHC 257 (Ch), a negligence claim brought by the liquidator of an insolvent company against its brokers for failing to prevent the fraud of its former director. Guy assisted Robert Miles QC and Andrew de Mestre QC on the law of attribution and illegality following the Supreme Court’s decisions in Bilta v Nazir and Patel v Mirza.

Guy is regularly instructed as a junior on large commercial disputes. His recent cases include:

Guy accepts instructions in all manner of company disputes, in particular claims for breach of directors’ duties, derivative claims, unfair prejudice petitions, and just and equitable winding-ups. His recent instructions include:

Guy has extensive experience of claims involving allegations of deceit and conspiracy. He is familiar with the particular challenges these claims present in terms of asset protection and enforcement and is regularly instructed to both obtain and discharge freezing injunctions and other forms of interim relief. His recent cases include Les Ambassadeurs Club Ltd v Yu, Al Jaber v Bosheh & Ors, and Kea Investments Ltd v Ivory Castle Ltd (above).

As a pupil, Guy was also involved in Tchenguiz v Grant Thornton UK LLP, a claim by a well-known property magnate against a global accounting firm in respect of an alleged conspiracy to procure an SFO investigation into the Claimant’s affairs. Guy assisted Tom Gentleman on an application concerning collateral use [2017] 1 WLR 2809 and in the Court of Appeal on the relationship between the Winding-up Directive and the Lugano II Convention [2017] EWCA Civ 83. He was subsequently instructed to assist in the preparation for trial.

Guy accepts instructions in all forms of commercial arbitration. His recent cases include:

Guy has a busy offshore practice and is particularly experienced in litigation in the DIFC. His recent experience includes:

Guy is the co-author of the chapter in Transaction Avoidance in Insolvencies 3rd Ed. (2018) on transaction avoidance in offshore jurisdictions.

Guy is a contributor to two works on insolvency: Transaction Avoidance in Insolvencies 3rd Ed. (2018) and Loose and Griffiths on Liquidators 9th Ed. (2019). His contributions include chapters on wrongful & fraudulent trading, transaction avoidance in offshore jurisdictions, and decision making within a liquidation. 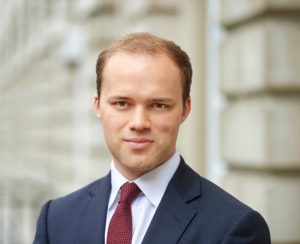