Lara has a busy commercial chancery practice specialising in the full range of Chambers’ work, including commercial litigation, company law, insolvency, banking and financial services, regulatory work and civil fraud. She also has particular experience and knowledge of energy-related matters.

Lara is ranked as a Rising Star in Tier 1 in Commercial Litigation in Legal 500 2022; she is quoted in the directory as ‘Very clever and inordinately hard working. She does a fantastic job.’ She was also named as one of 19 barristers in The Lawyer’s ‘Hot 100’ for 2022, being described as ‘the barrister of the moment’ for her work on insolvencies in the energy sector.

Lara is available for instructions at all stages of proceedings, in every level of the civil courts and for arbitration work. She has exceptionally substantial trial experience and of working in big teams of counsel and solicitors. She regularly appears in the High Court as both sole and junior counsel. Particularly notable matters include:

She has experience of and welcomes instructions concerning disputes in other jurisdictions, and is a registered Part II practitioner in the DIFC. She has also been appointed to the Attorney General’s C Panel of Counsel and regularly accepts instructions on behalf of the UK Government.

Her priority is to give practical advice tailored to suit the client’s individual needs.

Commercial litigation forms a substantial part of Lara’s practice. She has experience in a wide range of commercial litigation matters, both in the Commercial Court and the Chancery Division, and her work frequently features contractual disputes. She recently appeared (led by Richard Hill KC, Sa’ad Hossein KC and Andrew de Mestre KC) for the Claimants in the 7-day expedited trial of Travelport & Ors v WEX [2020] EWHC 2670, which concerned the interpretation of a complex material adverse change clause in the $1.7 billion purchase of two travel payments companies, against the background of the Covid-19 pandemic. Examples of past and ongoing instructions include:

Lara has a strong interest in insolvency work. She was a contributor to Lexis Nexis’s Insolvency Rules 2016 forms, replacing the prescribed forms under the 1986 rules, and is a contributor to the well-respected practitioner text Loose & Griffiths on Liquidators (9th ed., 2019). She regularly deals with proceedings under the Insolvency Act 1986, in the context of both company and personal insolvency. Examples of past and recent instructions include:

Lara has strong experience in banking and financial services and regulation and welcomes instructions in this area. As a baby junior, she undertook a secondment to the Financial Conduct Authority, focusing on the regulation of peer-to-peer lending firms, which gave her an excellent understanding of financial services and regulation under FSMA and the Regulated Activities Order. Particular instructions of note include the following:

Lara is interested in all areas of company law. She has a particularly strong background in dealing with shareholder disputes and issues concerning directors’ duties. Examples of recent and ongoing instructions include:

Lara was previously a contributor to Tolley’s Company Law Service and wrote the “Investigations by BEIS” chapter for the publication.

Lara’s work frequently raises issues of civil fraud, and she has extensive experience of claims involving allegations of conspiracy and deceit. Most notably she appeared as junior counsel to Robert Miles QC and Richard Hill KC in Autonomy and Ors v Lynch and Anor, a c. $8 million claim by Autonomy against its former CEO, Dr Mike Lynch for alleged fraudulent accounting, which was heard over the course of a 93-day trial between March 2019 and January 2020 in the Chancery Division. Other notable work includes:

Lara has a great deal of specialist knowledge and expertise relating to energy markets and regulation. As noted above, she is regularly instructed by OFGEM to appear in the High Court in respect of urgent energy-related matters, specifically in cases of insolvent energy supply companies. Lara has appeared in more than 20 such cases, including most notably Gas and Electricity Markets Authority v GB Energy Supply Ltd [2016] EWHC 3341 (Ch) (alongside Nicholas Cox) and Gas and Electricity Markets Authority v Rutherford Energy Supply Limited [2019] EWHC 2760 (Ch). In 2021 alone she was involved in most of the high-profile insolvencies of energy supply companies, including (amongst others) Bulb Energy, Avro Energy, Hub Energy, Green Network Energy, Simplicity Energy, PfP Energy, Moneyplus Energy, People’s Energy, Utility Point and green.energy. She is now instructed by OFGEM with Andrew de Mestre KC in an application for directions by the administrators of a number of these insolvent companies.

Lara’s work to date has involved a wide range of regulatory matters and she welcomes instructions engaging regulatory issues from regulators and regulated entities alike. She has an acute understanding of the particular issues that can be raised in the regulation of certain spheres and of the importance of the relationship between regulators and the entities they regulate. To give a flavour of her work:

Lara has experience of claims in a range of jurisdictions, and is a registered Part II practitioner in the DIFC.  Experience includes advising on and drafting a claim for unfair prejudice in Singapore, and being instructed on a c. £4 million claim for breach of contract, deceit and unlawful means conspiracy in relation to a securities trade in the DIFC.

Member of the Chancery Bar Association, COMBAR and the Insolvency Lawyers’ Association
Appointed to the Attorney General’s C Panel of Counsel (2022) 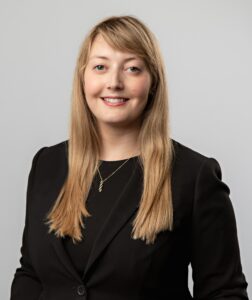