Nicholas is a commercial chancery barrister with a practice focussed on company law, shareholder and joint venture disputes, insolvency, civil fraud and commercial litigation. He regularly acts led and unled in cases across those areas.

Nicholas’ experience includes serving for a year as Judicial Assistant to Lord Briggs at the Supreme Court of the United Kingdom and the Judicial Committee of the Privy Council where he worked on a number of commercial and chancery cases and six months seconded to Allen & Overy LLP working on commercial and insolvency matters, including acting for the plan companies in the successful restructuring of the Virgin Active Group and for the Joint Administrators of Greensill Capital (UK) Limited on a number of contentious and investigatory matters arising from Greensill’s collapse.

Examples of Nicholas’ recent instructions include:

Before coming to the Bar, Nicholas obtained a double first in History and an MPhil in International Relations from the University of Cambridge, the GDL and BPTC from City, University of London and worked at a leading boutique litigation firm.

Nicholas has acted in a number of commercial claims, with a particular focus on contractual disputes and economic tort claims.

Company work is a core area of Nicholas’ practice. He has wide-ranging experience of shareholder and joint venture disputes, including unfair prejudice petitions, misappropriation of business cases and claims against directors for breach of duty and fraud:

Litigating and advising on fraud claims form a significant part of Nicholas’ work. Notable cases include:

Nicholas has been involved in a number of international arbitrations including:

Nicholas has experience of both personal and corporate insolvency and restructuring work, including:

Nicholas has substantial experience of offshore litigation, in particular arising from his time as the Judicial Assistant to Lord Briggs in his capacity as Supervising Justice of the Judicial Committee of the Privy Council.

2016: MPhil in International Relations and Politics, Peterhouse, University of Cambridge

Nicholas won and was named best speaker in the final of the 7KBW/ Clyde & Co Insurance Law Moot 2017 by Lady Justice Gloster. He also reached the penultimate round of the Maitland Advocacy Prize. 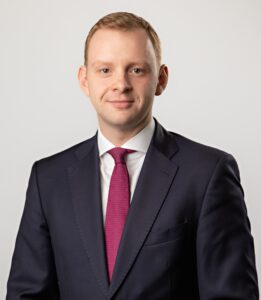