Zara practises across the full range of work undertaken by Chambers, including banking and finance, commercial litigation and arbitration, company and insolvency.

She regularly appears both led and unled in the High Court and County Court, and also has experience of international arbitration and arbitration-related court applications. Recent led instructions include, among others:

Before coming to the Bar, Zara read Classics and Modern Languages at the University of Oxford, with a year studying abroad in France. After her degree, she spent time living and working in Kazakhstan and Hong Kong. She has maintained her interest in both jurisdictions: she has rights of audience in the AIFC Court in Kazakhstan, and was awarded the 2018 Inner Temple Pegasus Scholarship to Hong Kong.

Zara is also a contributor to Loose and Griffiths on Liquidators (9th Ed.) (2019), and is happy to write and give talks on areas related to her practice. She was called to the Bar by Middle Temple, which awarded her a Diplock Scholarship for the GDL, and a Queen Mother Scholarship (then the Inn’s most prestigious award) for the BPTC.

Zara has been instructed both as sole counsel and as part of a team in various banking and finance disputes. These include:

Zara’s work spans chancery areas with a business flavour, and she regularly appears both as sole and as junior counsel in the Business & Property Courts. Recent instructions include:

Much of Zara’s practice concerns commercial disputes between businesses large and small in a range of different sectors. Recent work in this area includes:

Zara has been involved in a number of cases concerning fraud, and is thus familiar with the issues which often arise in such claims, including applications for interim relief. Recent experience includes:

Zara is regularly instructed on behalf of both creditors and debtors in both personal and corporate insolvency matters arising under the Insolvency Act 1986 and the Insolvency Rules 2016. She is also a contributor to Loose and Griffiths on Liquidators (9th Ed.) (2019). Her work in this area includes extensive experience of the winding-up list in the High Court and:

Zara has a strong interest in international arbitration. During her Pegasus Scholarship in Hong Kong in 2018, she spent a number of weeks at the HKIAC which coincided with the launch of the HKIAC Rules 2018. Recent instructions include:

Zara has a range of offshore experience, including in relation to matters in the DIFC. Recent work includes: 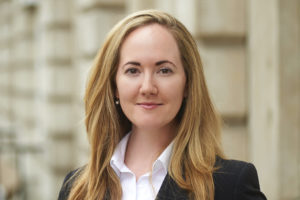