In a speech to the Chancery Bar Association in March of this year titled “The direction of travel”, the new Chancellor, the Rt Hon Sir Julian Flaux, set out “some preliminary thoughts on the road ahead” as he takes stock of his new role. His speech[1] gave practitioners a glimpse at what the ‘new normal’ might look like in the Chancery division and the B&PCs more widely.

It is likely to come as little surprise to practitioners that the Chancellor was clear that there would be no return to things as they were before COVID, and that the Court and users alike must “seize the good things that have come out of this terrible crisis”. But he also cautioned that with the easing of restrictions it was “time for a more reflective and less crisis-driven approach to remote hearings” and that the Courts should “jettison” the bad things associated with the new ways of working. Some highlights of the speech included the following.

In what may promise to be good news for the many clients and practitioners based on the circuits, the Chancellor indicated that availability of and confidence in remote technology is likely to foster a less London-centric approach to the allocation of specialist judges. In the Chancellor’s words, the technology has “opened the possibility of specialist judges ‘sitting’ outside London more easily and more swiftly being able to deal with short applications and hearings that require a High Court Judge in circumstances where those High Court Judges who are out on circuit are not free”. Highlighting in particular the extension of Intellectual Property Enterprise Court (IPEC) multi-track hearings to the seven B&PC centres outside London, the Chancellor noted that “[t]he ability to conduct even just the CMC remotely will mean that those often London-based judges are more likely to be able to hear cases that have been issued in one of the regional centres – probably Manchester or Newcastle – with the same level of service whilst allowing parties to have their dispute heard in a local court.”

The Chancellor gave an indication of the sorts of hearings that might routinely be appropriate for a remote hearing, emphasising in particular those where a “speedier less expensive format” seems appropriate such as “shorter preparatory and interim hearings that are often a collaborative exercise between parties like directions hearings”. One thinks in particular of CCMCs, disclosure guidance hearings and shorter interim applications not involving live witnesses. He also indicated those types of hearings which would not routinely be suitable for remote working, referring to “committal hearings, those elements of a trial involving an assessment of a witness’s credibility and (on occasion) interim applications involving a litigant in person”, which in his view were “all examples of matters that are often best conducted live”.

The dignity of the court

By now, most practitioners with a litigation practice will have their own anecdotes about remote hearings, from the amusing (the unexpected appearance of a judicial cat/dog/child), to the embarrassing (the unexpected appearance of your own cat/dog/child) to the nightmare inducing (a microphone left unmuted at an unguarded moment). All of these are things which generally cannot happen in a physical court room. Recognising the “informality that can creep in when we are conducting cases from our kitchen tables or studies”, the Chancellor emphasised the importance of maintaining the dignity of the Court and cautioned of the need to “guard against unintended consequences of informality”. In comments which might chime with the concerns many have about the effect of remote working on the training of new practitioners, the Chancellor worried that new advocates with less experience of live hearings “might lose the inherent sense of how to behave in court”, and at the detrimental effect such informality might have on their professional development. He sketched out some ways in which more formality might be introduced into a flexible system, emphasising that there should be “an understanding of the minimum level of IT provision for judges and the parties” and “a consistency of approach in referencing […] bundles, with proper file names and consistent page numbering”.

The Chancellor noted that conducting remote hearings is “more tiring for all concerned” and that it exacts “some personal cost”. In comments which may give some comfort to those who have experienced the blurring of work / life boundaries that fully remote work can entail, he signalled that the wellbeing of all court users was something he had well in mind. In particular, whilst applauding “the extra mile to which all in the legal system have gone” over the course of the pandemic, he cautioned that it “is not something I take for granted, and it is not a price that can continue to be exacted.”

The Chancellor also stressed the need for sensitivity of the fact that “technology has an exclusionary angle, particularly for litigants in person”, re-emphasising the likely desirability of hearings involving litigants in person being heard in person. If put into practice, this approach is likely to limit the scope for remote working in areas where litigants in person are more common, such as bankruptcy.

The divisions learning from one another?

Finally, in a fascinating hint at potential cross-pollination between the divisions, the Chancellor pondered out loud whether the Chancery division might benefit from a four-day sitting week, and whether the Commercial Court judges ought to be freed from some of their interim and box work by allowing the equivalent of Masters to undertake it instead, either of which would represent something of a seismic change to the working of the B&PCs.

[1] The full text of which can be found here: https://www.judiciary.uk/wp-content/uploads/2021/03/ChBA-speech.pdf 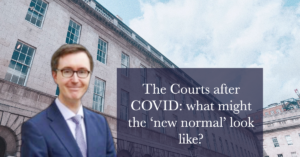