In YA II PN Ltd v Frontera Resources Group the order granting permission to serve out specified two addresses for service, but did not include the magic words.

YA II attempted to serve at one of the addresses (in the USA), but there was a notice on the door at that address saying the landlord had changed the locks as the tenant had not paid the rent. Attempts were then made to serve on officers of Frontera using details obtained from Frontera’s public filings. Service was not possible at the addresses given for the chairman or CEO, but YA II did manage to serve the documents on the person named in the public filings as vice president. Unfortunately, the public filings had not been kept up to date and he was not in fact an officer of Frontera at the time. He did, however, make the chairman aware that he had been served with the court documents.

Frontera did not file an admission or defence and default judgment was given. Frontera applied to set aside the default judgment on the basis that the claim form had not been validly served.

Effect of invalid service on a default judgment

Omit the magic words at your peril. There is no good reason not to include them, but potentially increased costs and delay if you do not. 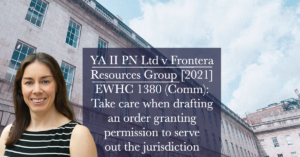