Daniel accepts instructions across the full spectrum of work undertaken by Chambers, including banking and finance, commercial litigation, company and insolvency litigation.

Before coming to the Bar, Daniel worked as an economist for five years, including working as an Economic Advisor to the Competition and Markets Authority and a Senior Associate in the Financial Conduct Authority. He maintains his interest in cases with an economic or financial element.

Daniel is the author of an insolvency textbook for litigants in person, ‘Insolvency Law Made Clear’. It can be purchased here.

Daniel has recently advised on whether a particular investment fell within the collective investment scheme regime under s.235 of FSMA. He has settled pleadings concerning the correct construction of a bond. His experience includes:

Daniel was instructed, with Sharif Shivji QC, in a £8m dispute over an employee share issue in a listed company.

Daniel regularly deals with matters where there are allegations of fraud, breach of fiduciary duties and dishonesty. Daniel acted as sole counsel in a £1m claim for fraud, unlawful means conspiracy and breach of contract. His experience includes:

Daniel is available to offer advice, drafting and representation at any stage of a dispute. He has recently advised a client on the scope of a non-disclosure agreement, and another on their prospects of success in a claim against a local authority for conversion. He was instructed on a multi-million pound claim in the Queen’s Bench Division for breach of fiduciary duty by means of a whistleblowing complaint, led by Sharif Shivji QC.

Daniel has drafted a Part 8 claim about the correct construction of a contract; and advised a solicitors’ firm on their prospects of success in a summary judgment application in a professional negligence claim.

Most of Daniel’s cases contain a company law component. His work has varied from applications to rectify the register of charges to multi-million pound High Court litigation. His experience includes:

Daniel is presently undertaking a secondment in the civil recovery unit at the National Crime Agency. As a pupil to Sharif Shivji, Daniel reviewed a s.298 POCA cash seizure application for Advocate. He has given a lecture on the use of the Proceeds of Crime Act to a public body.

Daniel is the author of a textbook for litigants in person on insolvency law, which covers the full range of issues an individual or an SME would face.

Daniel is routinely instructed to appear at bankruptcy petitions and applications in the County Court and the High Court. He regularly represents companies and creditors at winding up petitions. He has been instructed by OFGEM/GEMA on multiple occasions to appear as sole counsel in the High Court in relation to insolvent energy companies. He has offered advice and drafted a s.112 application against a liquidator. The liquidator settled without needing to issue. His experience includes:

Daniel has particular experience of the intersection between employment law and insolvency law. He has advised claimants on enforcement against insolvent companies and appeared successfully for a claimant before the Manchester Employment Tribunal on a TUPE-transfer case where the original employer went into liquidation.

Daniel is interested in applying the principles from English law to other jurisdictions. His experience includes:

Daniel is called to the Bar of the British Virgin Islands.

Member of the Chancery Bar Association

Member of the Commercial Bar Association

Daniel is on the Advocate volunteer panel.  He will consider pro bono instructions in appropriate cases. Daniel is not direct access qualified and cannot accept instructions from the public.

Daniel is the authority of  a book on insolvency law aimed at litigants in person: ‘Insolvency Law Made Clear: a Guide for Debtors’ (Bath Publishing, 2021).

“From sports betting to the stock market … what’s the difference?”, Butterworths Journal of International Banking and Financial Law, (2020) 9 JIBFL 624 (with Philip Rubens) 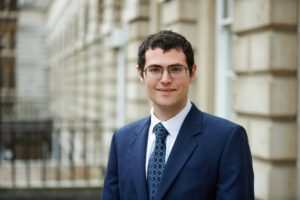